We may have different names for it, use different ingredient combinations, and prepare it differently, but we all love the freshly baked, fragrant mixture of bread that accompanies a traditional Thanksgiving meal and sometimes Christmas dinner, too.

But as vegans, we often have to skip the delicious stuffing or dressing (whatever you call it) on Thanksgiving spread (or should I say we have to skip this, too) because it has animal ingredients. Though, it can be made without them.

If you’re hosting a veganized Thanksgiving party this year, get yours from any vegan stuffing brands on the market. 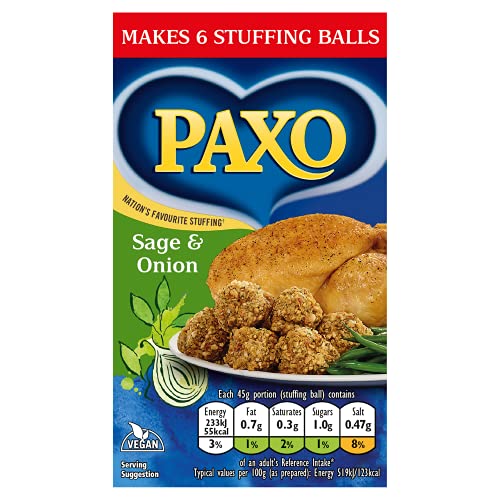 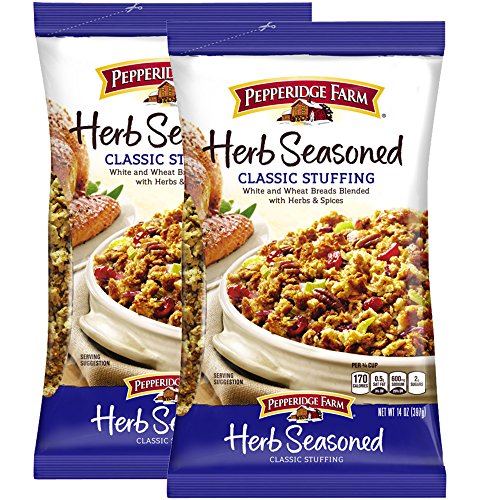 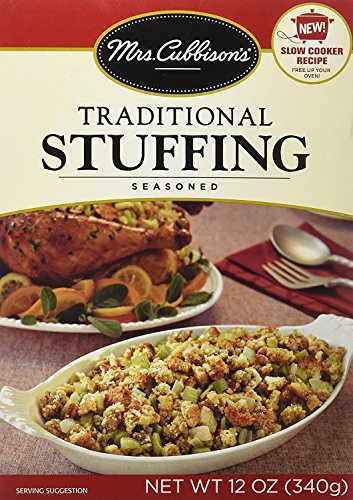 Why is Stuffing Not Vegan? Animal Ingredients in Stuffing

Although there is usually no meat in stuffing, this sadly doesn’t make it vegan-friendly. Despite no meat, stuffing often has more animal ingredients than non-vegan ingredients.

Animal ingredients in stuffing may include dairy, eggs, animal fat, and/or chicken broth.

Helping you to give your Thanksgiving dinner a vegan makeover, here are some of the best brands that offer ready-to-use plant-based stuffing:

In case you’re short on ideas for hosting a vegan Thanksgiving, Tasty has some great suggestions. Check out the following video for tips and recipes…

Don’t get confused by the chicken on the package (it’s poor marketing, though); look for the vegan label. PAXO has a vegan variety of its classic Sage & Onion stuffing. It’s made with flour, vegetable oils, onion, sage, parsley, salt, barley malt extract, and raising agents.

If you like the British take on this classic Thanksgiving dish or want to try something different than the American-style stuffing this year, give PAXO’s vegan sage and onion stuffing a try for a quick culinary trip to the UK. Its classic British flavor is simply delicious.

You may know Pepperidge Farm for its bread and cookies, but they make stuffing, too.

Pepperidge Farm stuffing may not carry the vegan label, but none contain meat, dairy, or other animal ingredients. Hence, they are considered vegan-friendly. What makes the brand even better is that there are five options to choose from. These include:

The brand’s Herb Seasoned Classic Stuffing is my personal favorite. Prepared with homegrown herbs, the authenticity of classic flavors it offers takes me to childhood Thanksgiving dinners at Granny’s. If you want a good dose of nostalgia this holiday season, give it a try. You will love it.

Whichever flavor you choose to make, don’t get frantic seeing butter and chicken broth in the list of ingredients required. Simply replace them with their vegan alternatives. Follow the directions on the package, and you will have the same delicious result as you would get cooking it with animal ingredients.

Making stuffing products for more than 70 years, Mrs. Cubbison’s is undeniably a stuffing expert brand. And while the brand was the first person ever to make soy products (she was a leading seller of them by 1924), it has failed to keep up with the changing dietary trends over time.

One thing that can be a bummer for some vegans is that there is palm oil in these stuffings, which they avoid for ethical reasons. However, the variety of palm oil the brand uses is certified by the Roundtable on Sustainable Palm Oil). Simply put, it’s sustainable.

If this is fine with you, head to your nearest store to stock up on Mrs. Cubbison’s delicious stuffing. They not only taste great but also take literally minutes to prepare. No one would be able to tell it, though. So, don’t get surprised if you get complimented for your cooking skills.

Olivia’s is a family-owned and operated brand primarily known for its delicious, organic, and gluten-free croutons. And rightly so! The brand has been making croutons for over 20 years and has truly made a name for itself by making the best varieties of them.

Olivia’s croutons are great, but their stuffing is no less, either.

The brand offers three varieties of flavors. However, only two of them meet the vegan criteria. These include Traditional Stuffing and Cornbread Dressing.

Olivia’s vegan stuffings are also preservative-free and have no added sugar in them, making them a somewhat healthier (If I may say so) option.

One thing to mention here is that according to Olivia’s website, the stuffings are only available seasonally. So, grab them while they are still making them.

If you’re a sourdough bread person, you would know that San Francisco is known for it, and they say the bakery that made San Fran sourdough famous is the Boudin Bakery. Established in 1849, the brand is the city’s oldest continuously operating business.

The bakery company is known for its sourdough bread, but it offers a lot more, from fresh food to packaged products, which include stuffing as well. And as you may have already guessed, it’s the sourdough stuffing.

USDA organic and Climate Pledge Friendly certified, Boudin Organic Sourdough Stuffing is seasoned with a classic blend of herbs and, although not labeled, is considered vegan-friendly. It has no animal ingredients but contains palm oil.

If you’re okay with it, this option seems worth trying. After all, you don’t find stuffing made from San Fran’s famous sourdough that easily.

Morrison’s is the UK’s leading supermarket chain that has its own brand, too, of the same name. Its line of products includes a few different types of stuffing, some of which are vegan-friendly.

From the names, it may seem that only the second one is vegan-friendly, but all these products carry the ‘vegan’ label and are marked vegan on Morrison’s website. They are also free of artificial flavors and colors.

Morrison’s products are available in the US on Amazon, so that’s where you should check.

Another British brand whose products are available on Amazon in the US is Tesco. Apart from its Wild Sage & Buttered Onion Stuffing, all others appear to be vegan-friendly.

While your safest bet is to buy stuffing that comes labeled as vegan, considering that not all carry the label and many may still meet the criteria, here are a few ingredients that could potentially be problematic for some vegans:

Palm oil seems to be a common ingredient in boxed stuffing. It’s found in the majority (if not all) of the stuffing varieties available out there, including those that contain no animal ingredients and even the ones that carry the vegan label.

Palm oil is a controversial ingredient in the vegan community for ethical reasons. For the uninitiated, the manufacturing of palm oil is a major factor behind increasing deforestation that is harmful to the environment and contributes to animal habitat destruction.

While some vegans (prefer to) avoid palm oil, others argue that its widespread use in the commercial food industry has made it extremely difficult (if not impossible) to do so. Your best bet in this scenario could be to look for brands that use certified sustainable palm oil.

People often presume that natural flavors are vegan-friendly. But those who have been vegan for any length of time know that this is a vague term and can sometimes be misleading. Natural flavors are anything derived from natural sources, which could be animals.

Several brands provide a detailed list of ingredients used in their stuffing (or any other product, for that matter), while others use generic terms like spices, which some vegans may find troubling. With terms like these, you don’t know what actual ingredients are used.

Conclusion – What is the Best Vegan Stuffing Brand?

I can’t name any one brand because each has its own set of pros and cons. PAXO stuffing comes with the vegan label but contains palm oil (it’s sustainable, though). Pepperidge Farm stuffings aren’t labeled vegan, but the brand offers the largest variety of animal-free stuffing of all the brands we have discussed.

The one from Boudin Bakery is certified organic, but, again, there’s palm oil in it. Morrison’s has a few varieties of stuffing that come with the vegan label, but they may not always be available in the US.

So, you do you. Choose the one that best aligns with your vegan ideology and is most easily available. Now that you’ve got your most important Thanksgiving side sorted, how about getting to know about some vegan pie crust varieties on the market, too?

Check out my article Best Vegan Pie Crust Brands, to know where to order the base of your pumpkin pie from.