I’ve always been the “skinny girl” for as long as I can remember. No matter how hard I tried, it used to seem like I could never gain any weight! I remember I used to eat peanut butter by the jar and do squats every other day…

At the end of the month, I’d only gained two pounds of muscle.

I pretty much gave up on gaining mass and accepted the fact that my genetics made it hard for me to gain weight. That is until I started working with a nutritionist and fitness trainer who created a customized vegan mass-gaining diet for me!

Adding a vegan mass gainer to my diet made a huge difference. I finally started to see results from my workouts, and I could feel myself getting bigger and stronger.

If you’re looking for the best vegan mass gainers to help you pack on the muscle, then you’ve come to the right place!

Today, I’ll break down some of the best sources of plant-based protein and give you my top recommendations for the best plant-based mass gainer supplements.

Are you ready to see some gains? 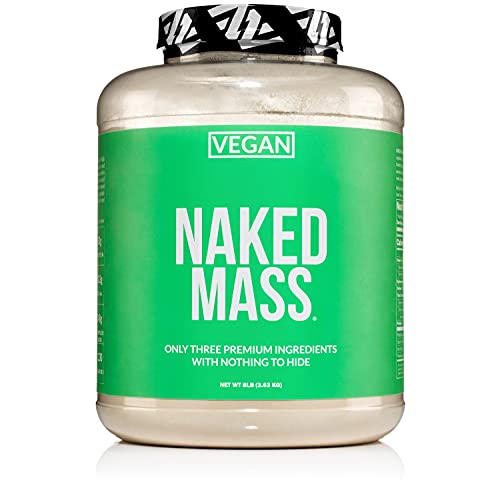 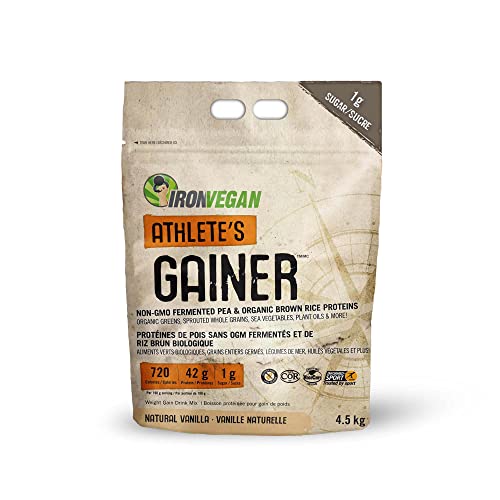 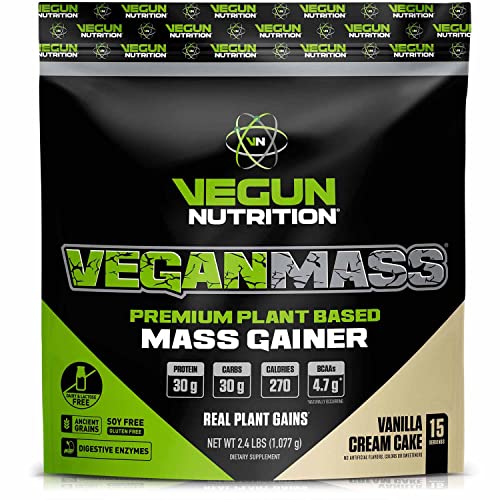 How Do Vegans Gain Mass?

One of the biggest misconceptions about plant-based eating is that we don’t get protein.

The majority of Americans have become so obsessed with meat that they tend to forget there are plenty of great sources of plant-based protein as well!

Once you break it down, gaining mass is actually pretty simple. All you need is:

To maintain general health, nutritionists recommend that we get around .3 grams of protein per every pound of body weight.

If you want to build muscle and see gains, though, you should consume around .7 grams of protein per pound of body weight.

Watch this short video to learn more about how much protein your body needs:

Vegans can pack on muscle and gain mass just as easily as non-vegans. There are several up-and-coming vegan bodybuilders who are out here winning competitions for both strength and physique!

Ultimately, it’s not just about the protein, though. A good plant-based vegan mass gainer will also contain essential and non-essential amino acids.

These amino acids work alongside your protein to help with absorption, energy recovery, and muscle fiber repair (all of which contribute to building strong muscles).

Is There A Reason Why You Shouldn’t Take A Mass Gainer?

If you’re an athlete or vegan bodybuilder who’s trying to gain weight and build muscle, then vegan mass gainers can dramatically increase your results.

However, mass gainers aren’t for everybody. They can be a bit expensive and are designed for serious athletes who are looking for serious results.

If you’re just a recreational athlete or you just go to the gym to maintain your overall health and fitness, then you may not need a mass gainer.

You should be able to get all of the protein that you need through vegan protein sources like tofu, tempeh, or legumes.

The Best Vegan Mass Gainers To Try In 2023

Although I wouldn’t call myself a bodybuilder, I’m very serious about building muscle. It’s been a goal of mine since I was in high school, and now I’m finally starting to see results!

I’m in the gym working with my trainer at least four days a week. If you combine consistent exercise with a great diet and adequate protein, you will see results.

A good vegan mass gainer is one of the best ways to ensure you’re getting the protein you need to help your body build and recover.

If you’re a vegan athlete or bodybuilder who’s looking to see some serious gains and pack on muscle, these are some of the best vegan mass gainers that I’ve tried over the past couple of years.

If you’re looking for a simple, no-nonsense mass gainer without artificial ingredients or extra additives, then Naked Vegan Mass Gainer is as simple as it gets. It’s made using three simple ingredients: pea protein, rice protein, and maltodextrin.

Pea protein and rice protein are both excellent sources of plant-based protein powder and will give your body all of the protein it needs to pack on muscle and grow strong.

Maltodextrin is a simple sugar that’s derived from tapioca. It’s absorbed very fast by your body, which elevates your blood sugar, helps your energy levels recover after a hard workout, and triggers your body to start packing on weight.

Each four-scoop serving contains 1,230 calories, which essentially makes this a huge meal-in-a-cup! That being said, your own caloric needs may differ, and you may not need to consume this much all at once.

This is where it helps to consult a nutritionist or trainer, as they can help you figure out exactly how many calories and macros you need every day.

It’s unflavored, which means that it tastes rather bland by itself. On the flip side, though, this allows it to be easily mixed into just about anything!

It’s also flavored, so it doesn’t taste quite as bland. That being said, the better ingredients come at a significantly higher cost, so be prepared to pay extra.

Additionally, Iron Vegan mass gainer is loaded with healthy superfoods that provide additional plant-based protein, essential minerals, and healthy fiber to help you digest it all.

Each serving contains 120 grams of carbs, but only 1 gram of this comes from added sugar. Instead of using unhealthy sugars to sweeten this powder, Iron Vegan uses all-natural stevia leaf extract to ensure that you’re only getting healthy complex carbs.

As far as the other macros go, each two-scoop serving contains 740 calories, 42 grams of plant-based protein, and 8 grams of fat, making it a viable mass gainer and meal replacement.

My only qualm with this vegan mass gainer is that it’s high in sodium. Each serving contains 550 mg of sodium, which amounts to around 24% of your daily intake. This can also leave you feeling somewhat bloated if you’re sensitive to salt in your diet.

If you’re looking for a lower-calorie vegan mass gainer that’s also loaded with plant-based protein and complex carbohydrates, then Vegun Nutrition Vegan Mass Gainer Powder is the one.

Unlike some of the other vegan mass gainers I’ve tried that are very high in calories, Vegun Nutrition mass gainer only contains 240 calories per serving. This serving also contains 30 grams of plant-based protein and 30 grams of complex carbohydrates.

This mass gainer doesn’t use cheap sugars either. The complex carbs come from a mixture of sweet potato powder, and organic ancient grains like oat bran, amaranth, buckwheat, millet, quinoa, and chia.

These ancient grains are high-quality complex carbs that encourage weight gain while also remaining healthy for your digestion and blood sugar level.

That’s not all, though. Vegun Nutrition vegan mass gainer is also packed full of essential and non-essential amino acids (18 different amino acids, to be exact).

These help with recovery, energy levels, and ensure that your body is able to build muscle quickly and efficiently!

If you’re looking for one of the most diverse sources of healthy complex carbs and plant-based protein, then GNC Earth Genius PurEdge Plant-Based Vegan Gainer is as good as it gets.

Personally, I’ve never taken a protein supplement or mass gainer that had as many sources of plant protein in one serving before I tried this product!

Like the Vegun Mass Gainer, GNC’s vegan mass gainer is relatively low in calories and only contains 280 calories per two-scoop serving. It also contains 35 grams of complex carbs and 25 grams of plant-based protein.

In addition to the complex plant protein blend, GNC also includes a proprietary blend of herbs and fruit extracts to aid in digestion and muscle recovery.

It’s also a rich source of essential nutrients, such as magnesium, calcium, iron, zinc, and potassium. It’s relatively low-sodium as well! To top it all off, it’s flavored with all-natural cocoa powder and low-calorie organic sweeteners.

Vega Sport Premium Protein Powder is one of my favorite vegan protein powders and mass gaining supplements. The base protein blend is made from four different sources of protein, which helps with absorption and provides a variety of naturally-occurring amino acids.

It may sound like a bit of an odd combination, but together they create a vibrant, delicious chocolate flavor that tastes as it came straight out of the South American rainforest!

Each serving contains 160 calories, 3 grams of fat, 6 grams of complex carbs, and 30 grams of high-quality vegan protein. It’s definitely a lower-calorie mass gainer, so if you’re trying to pack on calories, then you may want to consume several servings per day.

Last but not least, Vega Sport Protein Powder contains added vegan probiotics, which make it great for your gut health and digestion!

If you’re looking for a high-calorie mass gainer, then I’d have to say that Vegun Nutrition Vegan Mass Gainer is the best vegan mass gainer.

On the other hand, if you’re looking for a lower-calorie vegan mass gainer that’s loaded with healthy protein, herbs, and complex carbs, then I’d go for GNC’s PurEdge Plant-Based Gainer.

Mass gainers are great for dedicated athletes who are trying to pack on muscle. However, if you’re just looking for an everyday vegan protein supplement, then I suggest checking out my review of Ghost Vegan Protein!